The first edition of the Sport Festival has taken place in Trento, Italy, during 11 – 14 October 2018. Being sport addicts, at U-Hopper we could not miss the chance to monitor the Twitter coverage of the event with Tapoi. We have also been using a new interesting analysis for the first time: the people finder (or, as we have named it internally, the VIP radar).
The theme of this first edition has been The Record: why beating a record is the dream of every champion and any team? Because it means being the best!
The festival has been characterized by more than 100 events hosted in 15 different locations. More than 150 guests participated in order to discuss the achievements of well-known athletes and teams.

Tapoi analysis reveals that the official Twitter account @ilfestivalsport was not particularly active during the four days of the event. At least not as active as other social accounts we have been monitoring in the past for other events such as the Trento Economics Festival and the Trento Smart City Week.
In fact, only 72 of the 200 tweets that involved the festival were actually tweeted by the official account; all the others were simply retweets.

As it usually happens, we believe the most interesting information we can get from the monitoring of an event on Twitter come from the semantic analysis. In fact, Tapoi allows us to identify and extract the most meaningful words – we call them entities – used in the texts of the tweets and organize them by topic. This allows us to identify those discussion arguments that were more relevant and present during the event.
During the 4 days of the event, we were able to identify 270 distinct entities and 592 unique topics.

Tapoi is able to take advantage of the collected entities and topics and to categorize them according to different models. In particular, we considered two models for the monitoring of the Sport Festival: we call them the general model (it includes, among other general purpose categories such as Politics and Economics, also the Sport category) and the dedicated one (including various sports of interest for the event). For both models it has been possible to: 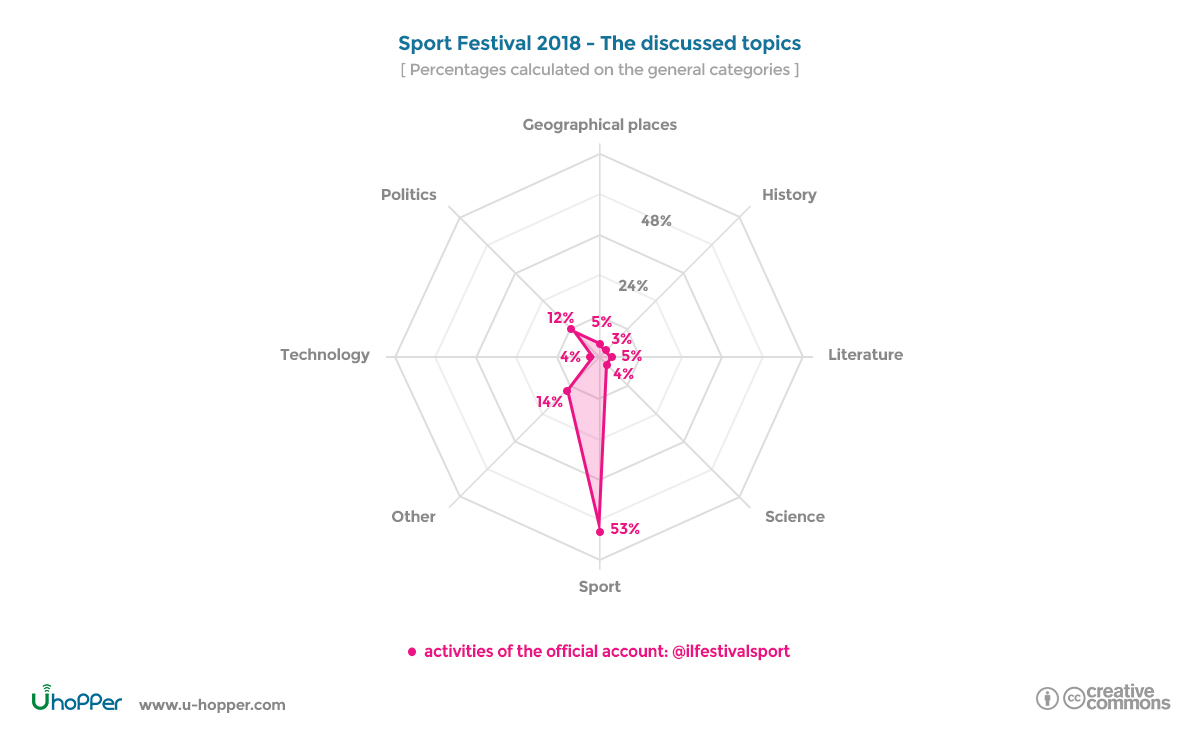 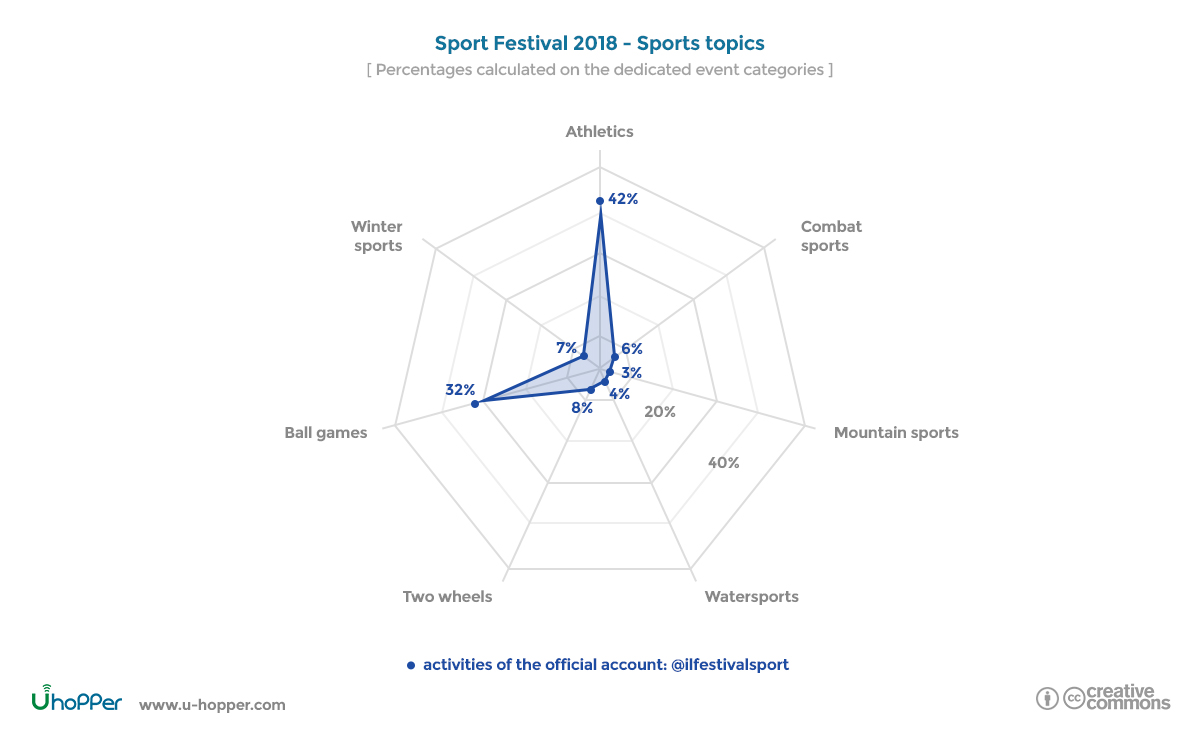 It is the dedicated model, the sport one, that offers most interesting insights. This model analyses the discussion on the specific sports. It is clear from the spider chart below how the main topic of discussion has been athletics with the 42% of the discussion share. Ball games (including disciplines such as football, basketball and volleyball) and two wheels (including biking and motorcycling) follow right behind with the 32% and 8% respectively. 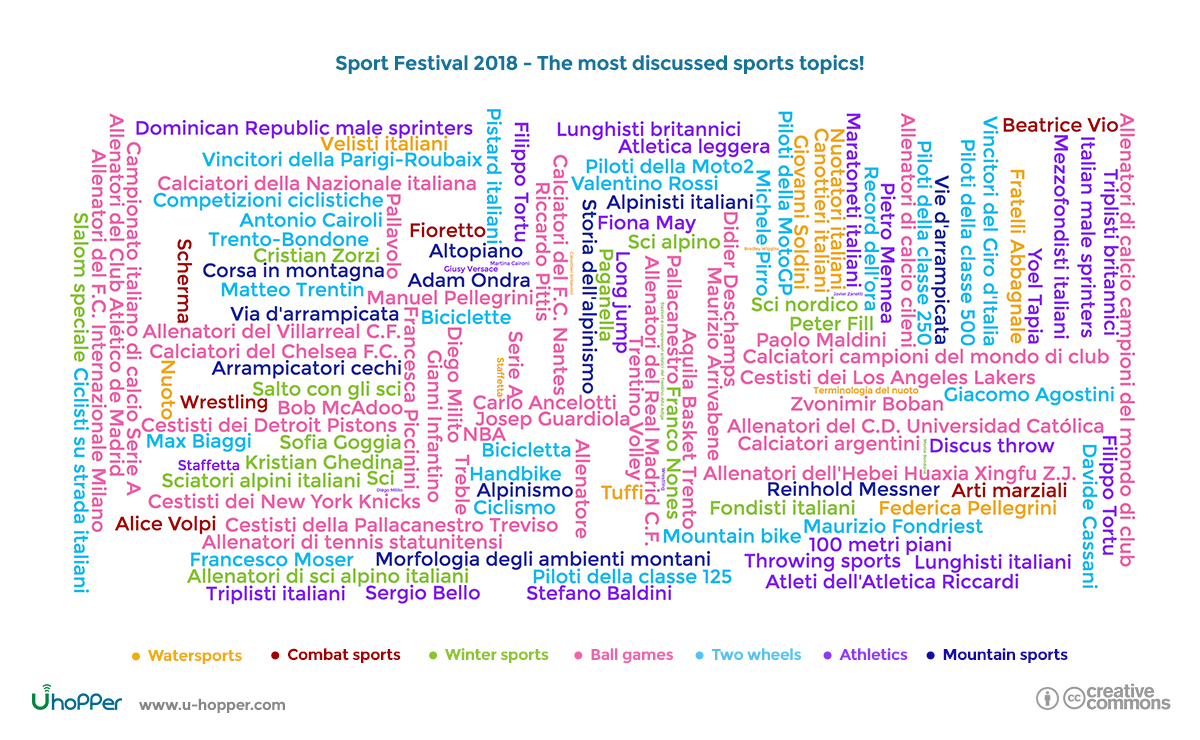 The result of the evaluation is confirmed by the identification of the entities and topics for the target categories. Among the more relevant ones there are sprints, jumps and throwing in the athletics field, climbing and trail running in mountain sports and various players and coaches in the the ball games (usually football ones).

As already anticipated, there is new analysis that we introduced just in time for monitoring this festival: we call it the people finder. It allows Tapoi to identify the identity of well known people mentioned in the social contents and to categorize them according to a specific model. If a page describing a person exists on Wikipedia, then Tapoi is capable of identifying her. The word cloud below (it is actually a name cloud) collects the people most mentioned at the Sport Festival. 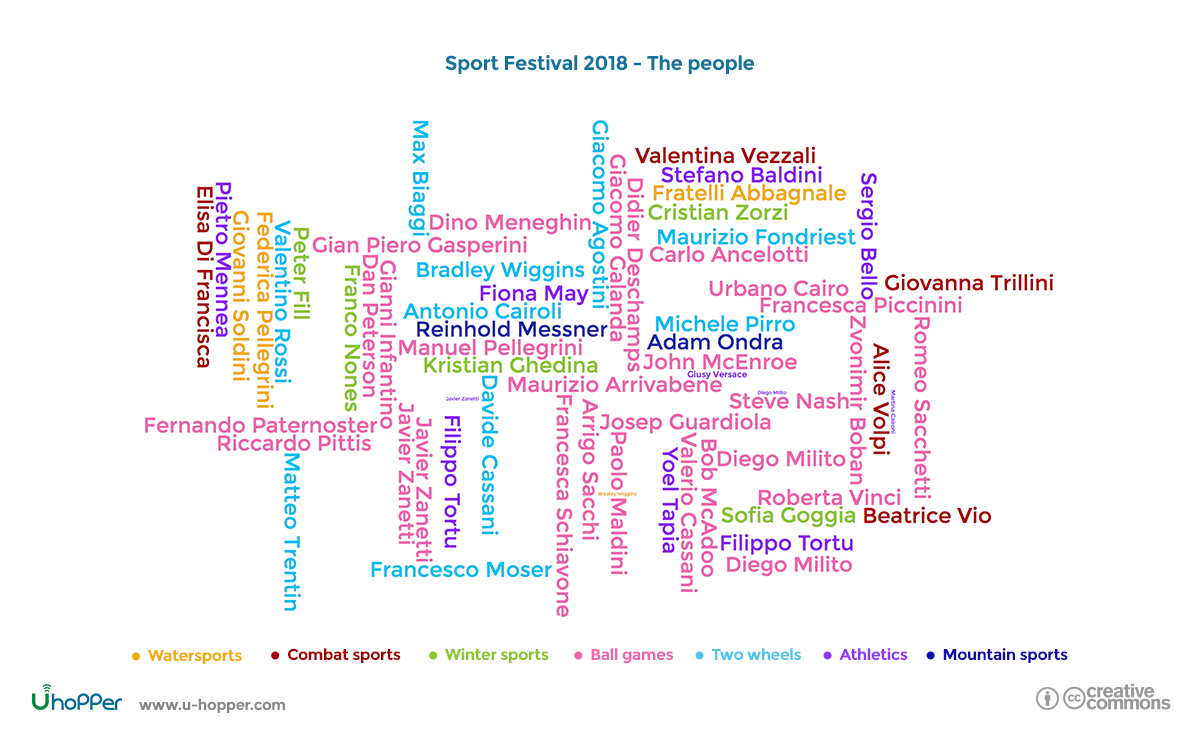 Once more, Tapoi allows us to monitor an event by analyzing its social coverage. We were successfully able to identify and confirm not only the main discussion topics but also the people that participated to the event.